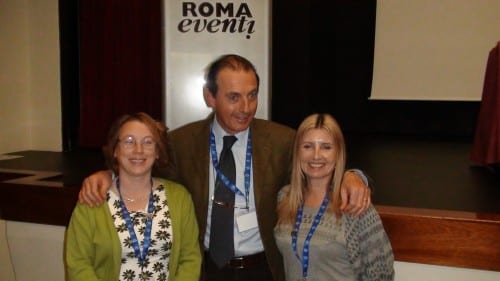 The 2nd & 3rd of February saw many important people gather together in Rome for the CDH conference ‘More Questions than Answers’.  We were honoured to have been represented at this important event by Brenda Lane & Beverley Power. The Conference was held under the guidance of the CDH Study Group and in collaboration with the CDH Euro Consortium. The Honorary Committee was made up of representatives from the Bambino Gesu Children’s Hospital in Rome and the meeting presidents were the highly respected Pietro Bagolan MD and Dick Tibboel  MD.

The contents of the conference touched upon the most debated aspects of CDH including Pathogenesis (cause, development & effects of CDH), prenatal treatment, ECMO, definition of stabilisation, surgical treatment and outcomes. This was in the form of invited lectures and pro/con debates.

We managed to meet with some highly respected and important figures within the field of medicine in between the lectures and debates and gleaned some useful information to assist with the issues that we feel are important to our families such as the information that we provide, how we support our families and the question of research.

As you will appreciate, over the two days a lot of information was received and some of it very in depth and spoken in the language of the medic at times. We have therefore chosen the areas that were of particular interest and have summarised below what we learned from these interesting lectures and debates.

To start, here is a brief extract from the opening talk by Professor Molenaar (Netherlands).

In the early days of CDH, patients were operated on without delay in the belief that the lung could then have the space to grow. By the mid 1980’s delayed surgery was implemented to allow for the patient’s condition to improve prior to surgery and then ECMO was introduced to deal with the sickest of patients with respiratory failure.  The question is; is it the Lung or is it the Diaphragm, or is it both that are responsible for the cause of CDH, or is it just bad luck or an accident of nature? Another question is the quality of life? This is debatable, but Parents should have full ability to decide.

We heard many interesting lectures and the cause of CDH was mainly focused on the genetic aspect and touched upon the possibility of a connection with Vitamin A. Research and studies have been carried out to find if there are any links to genes and interestingly deletions and mutations of certain genes and chromosomes have been evident, and also the possibility of an inherited gene. Much more research however is required in this area. Another interesting area into research is the use of stem cells and whether this therapy can be used in the treatment of CDH in the future. It remained inconclusive as to whether the lung or the Diaphragm is key in the development of CDH, or indeed whether both are involved.  Some studies have shown that Vitamin A may play a role, showing low levels of this Vitamin in children with CDH, however this was not the case with the Mother, who was shown to have normal levels. Vitamin A did show to accelerate lung growth in studies of Nitrofen models, but the administering of Vitamin A remains controversial due the risk associated with Spina Bifida.

It was felt overall that the prenatal diagnosis and prognosis of CDH has become much improved with the advanced scanning equipment that is available to sonographers & radiologists today.  It was recognised that  the Lung Head Ratio (LHR) measurement used in most institutions remains a useful tool for the prediction of the severity of CDH with a measurement of <1.0 indicating that the outcome may not be so good. The question of whether 3D ultrasound has a role to play in diagnostics was generally thought to have shown no particular benefits. The future of the MRI scanner as a diagnostics method was also questioned.

The overall conclusion was that there was a correlation between the size of the defect and survival and the presence of the liver in the chest cavity were also useful predictors of outcome.

The mode of delivery of the baby was very briefly touched upon, with one study showing a higher survival rate following a Cesarean section. This was thought to be due to the fact that there are more experienced medical personnel present at a C-section delivery. This provoked a question from Beverley to the speaker to clarify these findings and to suggest that if this is the case, then is this worth studying further and considering as a preferred method of delivery to ensure the attendance of a highly experienced team present at every birth of a baby with ante-nataly diagnosed CDH? Of course a natural birth is beneficial in itself, but can be long and unpredictable with staff shift changes etc. therefore the question is; is it difficult to plan the best team around these circumstances?

Both the subjects of FETO and ECMO remain controversial, with arguments for and against both of these therapies.

Whilst FETO is shown to have success in some cases, 50% of babies treated still die. FETO is a relatively minimally invasive procedure, but the risks still exist; premature birth, problems with removal of the balloon, possible lung damage and tracheal abnormalities. However, the fact remains that there is a success rate and lung growth does happen, but further well designed clinical trials, further discussions and better defined criteria are needed.

ECMO is primarily used as a rescue therapy in CDH and there is a certain criteria for its use. In some countries studies have shown improvements in survival rates with the use of ECMO, but also an increase in morbidity. The debate centred on the ‘quality of life’ of these patients and whether an ethical question comes into play. There is also limited availability of ECMO treatment in the UK with only 4 centres currently offering this therapy. It was suggested that there needs to be 2 to 3 countries involved for a successful ECMO trial to be undertaken to make conclusions on this mode of therapy.

With regards to ventilation techniques, it was shown that today we are seeing more survivors, but more cases of neurological damage. The damage effected on the lungs from ventilation injury was pointed out and there is no definitive proof whether HFOV ventilation is better than conventional  ventilation, one study did show that HFOV may have a benefit, but that it was also associated with a high mortality rate. There are still bioethical problems with ventilation and the question are babies being kept alive at any cost? was raised.

Repair of the hernia and timing was looked at and the consensus remains that surgery is better delayed to allow for stabilisation of the patient and a debate ensued as to the benefits of thorascopic repair compared to open surgery. The materials used to ‘patch’ the repair were discussed and biomaterials were discussed as a ‘patch’ for the future. Trials have been carried out using stem cells taken from amniotic fluid to create muscle and whilst this has a long way to go, functioning muscle was created. The materials currently used still have some unresolved problems with Gore-tex showing low re-occurrence in re-herniation. There was also some evidence that the requirement for a patch repair showed an increase in mortality and morbidity.

The psychological aspect was also discussed and we heard a talk from the Italian CDH Support group FABED (we were very pleased to have met their representatives). A talk was also given by a psychologist who explained the psychological affects that CDH has on families.

Follow up treatment is shown to be lacking in most countries and this was highlighted during a lecture and by studies into the development of children and in particular the motor & exercise functions. The conclusions of this study, is that follow up is recommended and an active lifestyle, as much as possible, should be implemented. Follow up will also assist with long term morbidity and the psychological aspect of CDH. We also commented on how strongly we felt about follow up and the need for psychological care for these children particularly as they reach early adulthood given the impact that their individual medical issues related to CDH may have on them.

So,  what did we learn and what benefits did we gain from our trip to Rome? Well apart from the fact the Italians make a great coffee and that a red traffic light at a pedestrian crossing means little to some drivers in Rome, we felt that our time and efforts were well spent and our personal conclusions are as follows:

FETO and ECMO still remain controversial and require much more research and further well designed trials. The survival rate, whilst claimed to be higher in some countries, still remains pretty much unchanged at around 50% overall. The cause is still unknown and the ‘Eureka’ moment is still to be had, but there are some interesting findings in recent studies into Genetics. There is an exciting prospect relating to stem cell research, which may have a role to play in future prevention and treatment and we will watch this closely. Vitamin A is also an interesting area and again we will watch with interest of any future developments surrounding this question and the need to investigate both the maternal and neonatal aspect. Identifying the pathology of CDH and associated anomalies is also required. Pulmonary Hypoplasia & Hypertension remain highly challenging and a defining factor in survival. Post natal ventilation techniques need to be evaluated and the use of drugs to treat Hypoplasia and Hypertension. Foetal intervention we felt has a role to play, but clearer criteria is required and also the inclusion of moderate CDH into that criteria. It is realised that there is a requirement for follow up of CDH patients and that parents should be given clearer information and choices. The exchange of data and information should be free between institutions and the collation of data is key to assisting with research and studies and instrumental in moving forward to find more answers.

As a charity, we came away with lots of medical information for us to study and evaluate and to refer to in the future. We also introduced CDH UK to many high profile medical professionals who were very interested to meet us and some of whom have asked for our assistance in helping them. We distributed our CDH Information Booklets and asked for feedback and we handed out our badges, which were very well received, with a hundred disappearing in no time! We involved ourselves in the debates where we felt we could make a valid point and the Italian FABED support group gave a lovely speech, which served to emphasise the importance of the involvement of Charities in the work of the researchers and to help the Doctor’s to provide the necessary information and empathy to families.

We now have new and important contacts to help us with our work and who we can also help in return with the provision of information from families. We are currently assisting a European organisation with information on CDH.

So it remains that there are still more questions than answers, but we have to remain hopeful for the future and in the meantime we will continue to support our families and the medical profession. As the saying goes ‘Rome wasn’t built in a day’