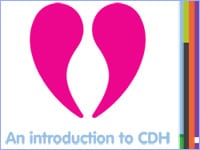 the part of the body of a vertebrate containing the digestive and reproductive organs; the belly

Amniocentesis is a procedure used to diagnose fetal defects in the early second trimester of pregnancy. A sample of the amniotic fluid, which surrounds a fetus in the womb, is collected through a pregnant woman’s abdomen using a needle and syringe. Tests performed on fetal cells found in the sample can reveal the presence of many types of genetic disorders, thus allowing doctors and prospective parents to make important decisions about early treatment and intervention

before birth; during or relating to pregnancy

a healthcare professional specializing in identifying, diagnosing, treating and monitoring disorders of the auditory and vestibular system portions of the ear

having or relating to two sides ; affecting both sides

the pH of the blood, the partial pressure of carbon dioxide and oxygen, and the bicarbonate level

the part of the alimentary canal below the stomach; the intestine

relating to the heart and blood vessels

of a thread-like structure of nucleic acids and protein found in the nucleus of most living cells, carrying genetic information in the form of genes

a formal meeting of people with a shared interest

Cornelia de Lange Syndrome aka CdLS is a genetic disorder that can lead to severe developmental anomalies. It affects both the physical and intellectual development of a child. Exact incidence is unknown, but is estimated at 1 in 10,000 to 30,000[1].

a person trained to give guidance on personal or psychological problems

Down syndrome, or Down’s syndrome (primarily in the United Kingdom),[1][2] trisomy 21, is a chromosomal condition caused by the presence of all or part of an extra 21st chromosome. It is named after John Langdon Down, the British physician who described the syndrome in 1866. The condition was identified as a chromosome 21 trisomy by Jérôme Lejeune in 1959. The condition is characterised by a combination of major and minor differences in structure.[clarification needed] Down syndrome in a fetus can be identified with amniocentesis during pregnancy, or in a baby at birth.

Trisomy 18 (T18) (also known as Trisomy E or Edwards syndrome) is a genetic disorder caused by the presence of all or part of an extra 18th chromosome. It is named after John H. Edwards, who first described the syndrome in 1960.[1] It is the second most common autosomal trisomy, after Down Syndrome.

relating to or arising from a person’s surroundings

This involves the placement of a balloon into a baby’s trachea to attempt to improve the development of the lungs whilst the baby is growing in the womb. FETO is classed as a minimally invasive procedure carried out by a specialist medical team

relating to or occurring in a family or its members

Maternal-Fetal medicine (MFM) is the branch of obstetrics that focuses on the medical and surgical management of high-risk pregnancies. Management includes monitoring and treatment including comprehensive ultrasound, chorionic villus sampling, genetic amniocentesis, and fetal surgery or treatment. An obstetrician who practices maternal-fetal medicine sometimes is known as a perinatologist. This is a subspecialty to obstetrics and gynecology mainly used for patients with high-risk pregnancies.

relating to the stomach and the intestines

relating to genes or heredity

a person qualified to carry out genetic counselling; the process by which patients or relatives, at risk of an inherited disorder, are advised of the consequences and nature of the disorder, the probability of developing or transmitting it, and the options open to them in management and family planning in order to prevent, avoid or ameliorate it. This complex process can be separated into diagnostic (the actual estimation of risk) and supportive aspects.[1]

relating to the genital and urinary organs

relating to geography; a geographical area; a region

Gore-Tex is a waterproof/breathable fabric

a hollow muscular organ that pumps the blood through the circulatory system by rhythmic contraction and dilation. In vertebrates there may be up to four chambers (as in humans), with two atria and two vent relating to the genital and urinary organsricles

a bulge or protrusion of an organ through the structure or muscle that usually contains it; suffer a hernia

the process of bringing on the birth of a baby by artificial means, typically by the use of drugs

the process of inserting a tube into (a person or a body part , especially the trachea for ventilation)

The kidneys’ main function is to purify the blood by removing nitrogenous waste products and excreting them in the urine. They also control the fluid and ion levels in the body, by excreting any excesses.

Lung to head ratio; is a numeric estimate of the size of the fetal lungs, based on measurement of the amount of visible lung

a large lobed glandular organ in the abdomen of vertebrates, involved in many metabolic processes

A local anaesthetic is a drug that causes reversible local anaesthesia and a loss of nociception. When it is used on specific nerve pathways (nerve block), effects such as analgesia (loss of pain sensation) and paralysis (loss of muscle power) can be achieved.

The lung (adjectival form: pulmonary) is the essential respiration organ in many air-breathing animals

an abnormally formed part of the body

a shifting or moving of the tissues and organs that comprise the mediastinum (heart, great vessels, trachea and esophagus) to one side of the chest cavity

a nurse who is trained to assist women in childbirth

involving or dependent on a number of factors, especially genetic or environmental factors

A Doctor specialising in Neonatology; a subspecialty of paediatrics that consists of the medical care of newborn infants

a plastic tube that is inserted through the nose, past the throat, and down into the stomach

neo-natal intensive care unit; a unit of a hospital specializing in the care of ill or premature newborn infants

a physician or surgeon qualified to practise in obstetrics; the surgical specialty dealing with the care of women and their children during pregnancy (prenatal period), childbirth and the postnatal period.

A Doctor specialising in Pediatrics; the branch of medicine that deals with the medical care of infants, children, and adolescents

Patau syndrome, also known as trisomy 13 and trisomy D, is a chromosomal abnormality, a syndrome in which a patient has an additional chromosome 13 due to a nondisjunction of chromosomes during meiosis. Some are caused by Robertsonian translocations. The extra chromosome 13 disrupts the normal course of development, causing heart and kidney defects amongst other features characteristic of Patau syndrome.[vague] Like all nondisjunction conditions (such as Down syndrome and Edwards syndrome), the risk of this syndrome in the offspring increases with maternal age at pregnancy, with about 31 years being the average.[1] Patau syndrome affects approximately one in 10,000 live birthsme, that carries to term.

the likely course of a medical condition

gastric acid flowing from the stomach into the esophagus

amount of volume of lung

is used to describe inadequate gas exchange by the respiratory system, with the result that arterial oxygen and/or carbon dioxide levels cannot be maintained within their normal ranges

a medical examination using a scanner

a conference or other meeting for discussion or training

a qualified person in the field of speech therapy

make or become unlikely to change, fail, or decline

the internal organ in which the first part of digestion occurs, being (in humans and many mammals) a pear-shaped enlargement of the alimentary canal linking the oesophagus to the small intestine

a group of symptoms which consistently occur together , or a condition characterized by a set of associated symptoms

relating to the Thorax

the part of the body of a mammal between the neck and the abdomen, including the cavity enclosed by the ribs, breastbone, and dorsal vertebrae, and containing the chief organs of circulation and respiration; the chest.

a large membranous tube reinforced by rings of cartilage, extending from the larynx to the bronchial tubes and conveying air to and from the lungs; the windpipe

sound or other vibrations having an ultrasonic frequency, particularly as used in medical imaging to produce a scan picture of an internal organ, foetus, growth or foreign body for example.

the internal organs in the main cavities of the body, especially those in the abdomen, e.g. the intestines

The contents of the stomach following expulsion from the body

The action of the human body to expel the contents of the stomach also referred to as being sick, puking, throwing up, spewing up.