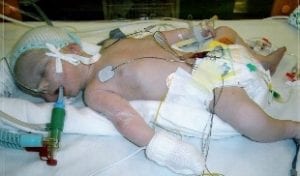 I’ll never forget the day we found out you were ill – Monday 25th September 2006 at 4pm. We felt like our world had collapsed. The sonographer was taking ages then she went to get a second opinion then said “It appears some of your baby’s diaphragm is missing but don’t worry – It’s fixable”. If only it was that simple. I was then scanned every few weeks and you were given a 50/50 chance of survival. At 39 weeks my blood pressure became too high so I was booked for an induction on 1st Feb. At 2:30 the following morning my waters broke and you were born at 3:43am on Friday 2nd Feb 2007. Your eyes were closed, you were so very still and an awful grey colour – but I could see your heart beating. You were soon taken off to the neonatal unit. Your Daddy went off to ring your Mamma to tell her you had arrived and it was then that I felt the loneliest, most frightened I’ve been in my life. The midwife took us to see you at 6:15am, the doctor looking after you said “I’m afraid your Son is very, very ill”. I looked at him and just knew he was telling us you were not going to be with us for long. For the next 2 hours we sat and talked to you and stroked your hands but at 8:15am I got an overwhelming feeling that I had to leave. Your Daddy agreed so we went to get my things and I was transferred up onto the ward. I was placed next to 3 healthy, crying babies and I was just about to go and ask if I could be moved as it was more than I could bear listening to their cries, knowing I would probably never hear yours, when the neonatal nurse appeared around the curtain and said you had taken a turn for the worse and I just knew that you had gone off with the angels then Sweetheart. Sure enough when we got there the consultant said you were in cardiac arrest and they had been working on you for 20 mins but you were not going to survive. We spent the whole day with you Sweetheart and you looked so very peaceful, just like you had had a big milk feed and enjoying a snooze after. You were buried 2 weeks later with lots of teddies, toy cars from your big brother Christian and photo’s of all your family. It never stopped raining the day you were put into the Earth. After your post mortem (sorry you had to go through that Sweetheart but we needed to know why you were so very poorly, more so than anyone expected) it was found that you had bilateral diaphragmatic hernia which is very, very rare. None of the staff had ever seen a baby with it before so you are so very special Sweetheart. Your lungs were less than a quarter of the size of a term newborn so you had far too much to battle against. You were destined for the angels all along. I know you are at peace now, no more suffering sweet baby, safely resting in your Grandma Jordan’s arms.

This is a poem composed for you by your Great Aunt Marion.

May these few words remember one so loved
Lift up your hearts, let your spirit be moved
Into that secret place within our souls
A place so protective against life’s tolls

Look to the stars, see him play there
Playing in Heaven, Earth and everywhere
A gap in the clouds, see the sun’s rays
become….
A playground slide where he happily plays

When placed in the earth from whence he came
Tears of a thousand angels fell as rain
Washing the grief of those attended
Hoping their hearts will soon be mended.