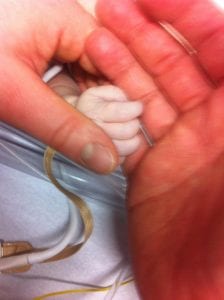 All my life I had dreamt of this day -seeing my baby on that screen for the first time. I laid on the bed and we saw our baby we could make out the heart beat and we were so happy. Quickly though from the silence of the sonographer we started to worry.  They were measuring over and over and then she got another person in.  We were asked to go upstairs to a quiet room (I hate these places). It was explained to us that the NT layer was thicker than it should be indicating a chromosone abnormality or heart defect. We were refered to Leeds for further tests. We had a CVS done and had the worst 2 days ever waiting for results. Fortunately they came back clear we were elated. Next was the heart echo which showed a slight narrowing of one of the valves but this was not too serious and easily fixed after birth. So back to the consultant for another scan – this was when they realised that the heart was on the wrong side and the stomach was along side it. By now we were about 14 weeks.
I dont remember them explaining it all that well to be honest I remember almost being relieved that it was a physical defect that I thought would be easily fixed- its just a hole after all (so little did i know). It wasnt until I got home and googled it i started to realise what we were dealing with.
We were determined to give our little one every chance though and we did all we could to stay positive.
At 38 wks my waters broke so we headed to Leeds, once there we had a long long wait as nothing else happened. 36 hours later I was put on a drip and it all started.  A very scarey moment knowing what a struggle it was going to be but also exciting to know we were about to meet out baby.
A team was ready for her when she arrived and got her onto all the machines we got a breif glace and then she was gone. 2 hrs later we were told the devistating news that she wasnt responding well, her oxygen levels were way to low and she was very poorly. She might not make it through the night. We went to see her for the first time. Seeing her little chest vibrating was so upsetting but she was so beautiful. Afew hours later we got a little hope in the fact that she had made it through the night but that was soon destroyed when we were told she was only getting worse. Fortunately there was time for all her grandparents to visit her and say hello.  At 3.30 on 29th Feb 2012 they took her off all the machines and brave Daddy held her as she passed away.  I was hiding away in too much of a state to be there. I wanted to just run away. Im so grateful to the midwife who talked me into holding her I would have hated myself if I had not.
Just 19 hours in this world but she touched so many, we are truely honoured to have held her and will forever treasure the moments we shared. Our beautiful forever baby Madison Ann