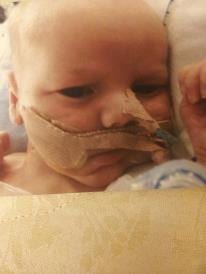 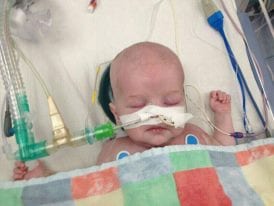 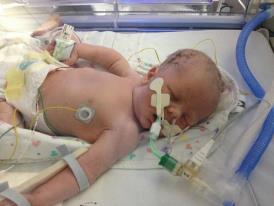 We found out Lincoln had a LCDH at my 20wk scan, we were passed over too Sheffield hospital were we were told that he only had 30% chance of survival due to the severity of the case. We decided too go ahead with the pregnancy as we wanted too give him every possible chance. I was induced at 38wks and he arrived into the world by emergency c-section at 10:36 31/10/2012 weighing 7lb. The consultant told my partner that the next 24hrs were critical and they were not sure if he would make it. I was allowed to see him 18hrs later and he was a gorgeous little brusier. He fought very hard for 11days until Sheffield told us they had done all they could and they were ringing Leicester’s glenfield hospital too see if he was eligble for Ecmo …. after an agonising wait we were told he was and they came too pick him up from sheffield as he was too unstable too travel there. Once at leicester on ecmo he remained stable and had his operation on 21/11/12. Eventually he came off ecmo and of

f his nitric and his ventilation was reduced too 30% so he was transferred back to sheffield childrens hospital. We noticied that he seemed too be struggling abit but just assumed it was because he had just come off ecmo and his body was getting used too working for itself but days passed then weeks and we knew deep in our hearts that he was just too poorly and his lung was just too be badly damaged (the other was non existant) the drugs which he was on was causing his heart too be under pressure also. On 16/12/2012 around 10:00pm the consultant told us too contact our families as they didnt think he would make it through the night. Our families arrived and we sat in a room together with Lincoln on my knee and we said our goodbyes. Lincoln died peacefully in my arms with his daddy next too him around 01:30am 17/12/2012 xxxx We are so proud of our baby, he fought for so long and so hard but it was just too much for him. We cannot thank both hospitals enough, they really did t
ry everything too save him but he was just too beautiful for this earth xxxx