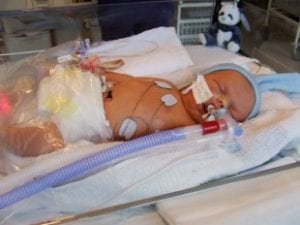 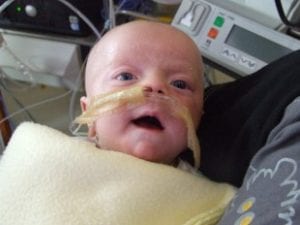 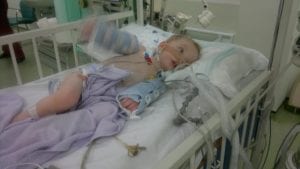 Ollie Jake Gladman had a FETO balloon put in at 27 wks. When they went to remove balloon at 34 wks it was no longer there,so they put another one in and because Ollie went into distress as they were doing this I had a emergancy c section at 34wks.  With ollie only having a 5% chance of surviving he did well and on day 5 had his 9 hr op to repair the cdh. It took a very long time to recover after this, but he came off vent about 8 wks later and did well, but was soon having apnoea attacks and they thought he was aspirating, so they put him on a NJ tube so he could grow. In January 2009 at 3 half months he had a nissens fundoplication and got a infection and was serirously ill for 3 wks. Being on 13 infusions we were told he wouldnt make it twice, and if by a miricle he did he would be brain damaged, but he did survive and wasnt brain damaged. Then in Feb 2009 he got a bowel obstruction. He had to have some bowel removed, but recovered well and the finally after nearly 6 months we were transferred to our local hospital .and then stayed there for a few days then went home This was the most amazing day ever, as I only ever came home twice while ollie was in hospital. He came home with support from the community team and a feeding tube in situ. He did have lots off chest infections and retching, but did well. He has global delayed development and doesn’t eat or talk. Then xmas 2010 Ollie got swine flu. Our local hospital could no longer care for him and he was transferred to St Thomas in london ventilated and was fighting for his life for 3 wks, but he made it amazing lil boy! He has just recovered from a pneumonia episode, where he was on full oxygen support. He is doing well, but has his problems and is now 4 yrs, but one amazing boy who never gave up.