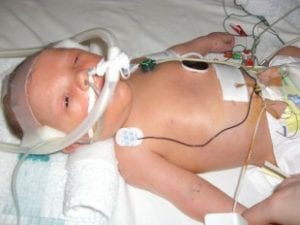 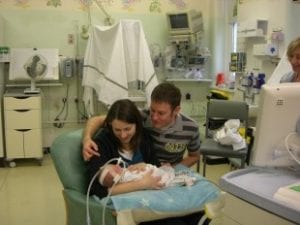 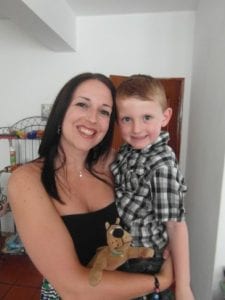 It all started when we went for my 20 week scan. The midwife went through all the usual pleasantries and started checking the baby then…silence. I looked up at the scan asking her what was wrong. she stopped scanning and told us to sit in a room and a Doctor would be in with us soon. I thought the worst. We waited forever and finally a Doctor arrived and told us there was something wrong with our baby and we might have to terminate but they would send us for a 3D scan at another hospital next week. I felt sick, faint and disgusted that she expected us to wait a week to find out what was wrong with our baby. I
demanded she contact the hospital and demanded an earlier appointment and luckily there was a cancellation for the next day. We went home ill with fear and confusion. All I could tell people was that there was something wrong with our baby and I was too upset to talk. The next day, we went to the RVI for the scan and the staff were fantastic, from the receptionist who offered me water as I was feeling faint with worry, to the nurses and consultant trying to sound so positive during and after the scans. They explained our baby had a severe left sided Congenital Diaphragmatic Hernia (CDH) meaning there was a hole in the diaphragm and the stomach, bowel and intestines were all in the chest squashing the lungs and pushing the heart over to the right. After some further tests we were also told there was a 5% chance of our baby having a syndrome. We were told only 50% of CDH babies survive and I was given the option to terminate our baby. seeing the baby on the screen, it’s tiny heart beating, there was never any intention of terminating. We just wanted to focus on what we had to do to get our baby to survive.

It was a heart wrenching pregnancy, thrilled to feel the baby move, seeing it on the scans growing bigger but it was always in the back of my mind how we would cope if the worst happened. No one we knew had heard of CDH although my husband Andrew was so positive throughout he carried me along. I had scans every 2-3 weeks and the hospital decided to plan an induction at 39 weeks so the specialist team was on standby. The closer I came to my induction date, the more I felt sick, I didn’t want our baby to come out as I knew it might not survive the birth. After 3 days of induction Lucas James Cartner was born on the 17th May 2007 and I was petrified. My husband tried to take a quick photo when Lucas was lifted on to my chest but all I wanted to do was hand him to the specialist team. I had a room full of midwives, Doctors, students and the specialist team. They intubated him straightaway and took him to the special Care Baby Unit (SCBU). It was all a blur but I remember two members of the surgery team coming in with consent forms to sign for his operation and they wanted to do it as soon as he was stable. Andrew came back from SCBU with a photo of Lucas half an hour old. even now when I look at that photo tears well up with the memories. That photo is all I had for 5 weeks. I kissed it every night and the nurses suggested I looked at it to encourage my breast milk while expressing, even getting up at 4am to express!

I was wheeled down 3 hours after his birth to see Lucas. I was as white as a sheet and really couldn’t take it all in. There were wires and monitors beeping everywhere. He was on a ventilator and he was paralyzed as they had to sedate him as he had tried to pull his tubes out! He looked huge compared to the other babies in SCBU, they were all 1b, 2lb premature babies and he was 7lb 13oz born, which the Doctors said was a good weight for a CDH baby and it gave him the best start. He had also swollen up with all the fluid and it took them 6 days to get him stable enough for his operation. A heart specialist from a nearby hospital came to assess him as his blood pressure had been too high to operate. He suggested they use a Viagra based drug to open his heart valve and relieve the pressure on his heart. The day of his operation was almost unbearable for us. We went with Lucas to the operating theatre, stroked his head, kissed him and told him to be brave. Then the wait; we walked round the hospital, over to the park and barely spoke to each other. On our way back to my room, one of the Doctors stopped us in the corridor and said ‘I hear he’s back’. It didn’t sink in what he was saying and then he said that Lucas was back. There was even a spleen up in his chest but the surgeon was able to use his muscle rather than a patch and it was a success. My heart was in my mouth as we ran back to SCBU to see him and I burst into tears with relief. There he was with all the wires still there but now with a huge white plaster over his tummy. He had survived the birth and now he had survived the operation. We were thrilled but knew there was still a long way to go.

From that moment on he thrived; he moved to Intensive Care, he was tube fed my breast milk, the ventilator eventually came off and he went on the vapotherm. We gave him his first bath, first cuddle with Mammy and Daddy at 3 weeks old and then he moved onto a ward where I could stay overnight with him. We were so happy when at 5 weeks old the consultant said he could come home. We had to be careful about him getting a cold or flu as he could end up back in hospital so every visitor was made to wash their hands and use one of our many antibacterial soaps!
Lucas is now 5 years old and is doing well although he has recently had some bowel and tummy issues . He does get tired very easily due to his small left lung but the hospital can’t test his lung function until he is 6, sometimes we forget how much we all went through but his shark attack scar is a daily reminder. Lucas had a recent check up and the consultant had said the surgeon Mr De La Hunt had done an exceptional job and Lucaswas leading the way for CDH research as 20 years ago he would not have survived. We are so grateful to all the staff we saw at the RVI, Newcastle for all their help and support and for saving our little boys life.