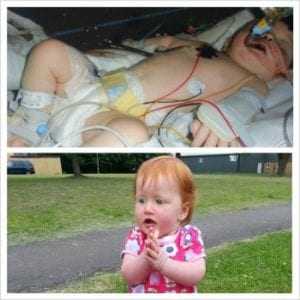 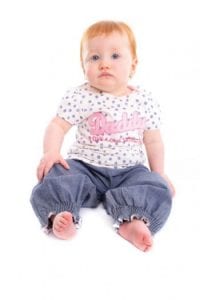 We were pleased when we found out that we were pregnant with our second child.  Everything throughout the pregnancy was fine and at the 20 week scan we found out we were having a girl.  No signs of anything wrong were picked up.
So we carried on as normal and I gave birth to Hallie on 26th March 2012 at our local community hospital.
Everything seemed fine until we had some concerns about Hallie’s breathing and feeding pattern so we took her to our GP and they said everything was fine!  Over the next 12 weeks we went back and forth to the GP’s seeing 5 different doctors and they all said everything was fine.  I kept thinking to myself Mum knows best so in the end we went to A&E they did a chest x-ray.
This was on a Saturday night so we was admitted to a Ward at 1am Sunday morning still not knowing what was wrong as they hadn’t told us yet!  Then at 3am the same morning the surgical registrar came round and explained that they think Hallie had CDH.  I didn’t know what to think as he said we think she has CDH and I had never heard of it before.  I was quite emotional so the nurse came and sat with me for a little while and she asked if had I seen the x-ray to that I said no as no one had showed me.  She then showed me and explained what everything was and where it should actually be.  Clearly the Surgeon knew Hallie has CDH but was trying not to get me too worried by saying think.
From being admitted Hallie was then starved until her surgery on the Monday.  Naturally Hallie was hungry and very inconsolable as she feed 1 ounce every 2-3 hours prior to this.

Monday surgery day came and after her surgery Hallie was took to PICU.  Which was shocking as our little girl was fine before surgery.  All the wires and machines were so overwhelming.
Hallie spent 4 days in PICU then we were sent to a Ward for observation.  We spent a further 4 days on a ward then were discharged.
Hallie always has chest infections, so we regularly see the respiratory team at our local Children’s Hospital as Hallie only has 50% lung capacity.