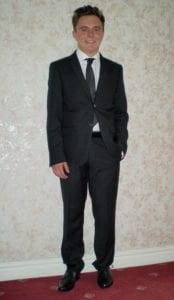 My pregnancy had been normal and I was induced when Daniel was 10 days overdue. Three hours later his heart rate had suddenly dropped dangerously low and I was rushed to theatre.
Daniel was lifeless at birth and resusitated in theatre, intubated and then x-rayed. This is when they found his CDH and he was transferred to intensive care in Liverpool. During the next three days he ‘died’ twice more.
He went to theatre aged 3 days and the most difficult thing I have ever had to do was sign the consent form knowing that there was a very high chance that he would die in theatre.
He had a few problems with his left lung collapsing after surgery, but when he was only four weeks old we brought him home.
The first couple of years were difficult as he had severe asthma and was in and out of hospital, but he’s almost grown out of that now.
I couldn’t be prouder of my gorgeous, clever 16 year old son.
There isn’t a day that goes by when I don’t thank god for the skill of Mr Lamont at Alder Hey hospital, the Neonatal Intensive Care staff at Liverpool Women’s Hospital and lastly the maternity and paediatric teams at Ormskirk hospital. Without all these wonderfully skilled and dedicated staff we wouldn’t have our lovely boy.