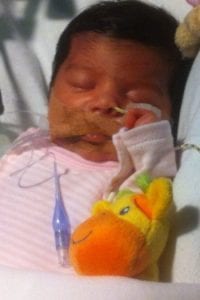 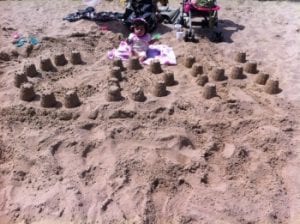 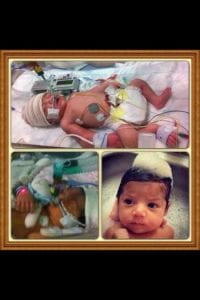 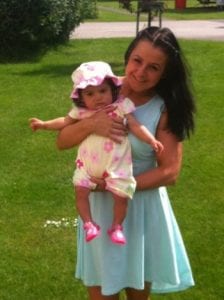 On November the 18th 2012 at 4.28am, I gave birth to my beautiful daughter Arayaa, however this was no normal pregnancy. At my 20 week scan instead of finding out the sex of my baby, I was faced with the horrific news that my unborn child had a birth defect known as CDH (congenital diaphragmatic hernia).This defect is when the diaphragm fails to form correctly and allows the abdominal contents and sometimes the liver in severe cases to herniate into the chest cavity and consume the space where the lungs and heart should be developing. The abdominal contents then compromise the lungs which makes it virtually impossible for them to develop and prevents babies to breathe alone without assistance once out of the womb. Every case is different and there is no telling whether these babies are going to survive once born. CDH occurs 1 in 2500 births and the prognosis of survival is a 50/50 chance.

Please could you take five minutes out of your time to read mine and Arayaa’s story and help raise money to support this charity, help fund research into this birth defect and help families that have to go through this traumatic jorney of fear and helplessness which I had to.

My journey began at my 20 week scan, I was informed by the radiographer that my baby had CDH and chances where she may not survive. Words cannot describe how I felt, my whole world came crashing down around me. To hear this devastating news that theres an abnormality on the scan is a mothers worst nightmare. At this time there was a few options given to me, I was offered a termination, proceed with the pregnancy under extra care or continue with the pregnancy not having any other scans and just see what happens when my unborn baby arrived. Despite the horrific heartbreak I felt there was no way that I was terminating this pregnancy, I could feel her move and I loved her so much and despite all of the sadness and fear, I was her mom and I had to go through to the end. knowing that she may not survive was breaking my heart.

Once the devasting news had sunk in over the next couple of days I suddenly felt an inner strength and started to research this birth defect and came across a paper article about a professor in London who  conducted pioneering surgery whilst the unborn baby is still in the womb, especially for babies with a very poor prognosis. The surgery known as FETO (Fetal Endoscopic Trachael Occlusion)consists of placing a balloon into the babies trachea whilst in the womb, this helps the lungs expand to give babies a better chance of survival once born. I knew as soon as I seen this I wanted to go and see him, I wanted to do anything  possible to save my baby. FETO was and is an experiment and there are no guarantees that it is successful but I didn’t care, I had to give it go.

At my scans each week my baby girls right lung was decreasing in size, her stomach bowel and part of her liver was in her chest preventing her left lung from growing at all. This is when I was told at 25 weeks pregnant that my unborn baby girl had only ten percent chance of survival. The fetal medicine team prepared me for the worst. Amidst all the pain and uncertainty I wanted to fight for her, and requested that I go to the professor at kings college hospital to have FETO. Birmingham Heartlands Hospital transferred me to Kings College Hospital London and at 26 weeks I underwent FETO surgery. The surgery was a success and the balloon was placed in her trachea, for the next two months I had to live in London because this was the only hospital in the UK that performed the surgery to insert and remove the balloon. It was very difficult, traumatic and emotional living in London on my own in a guest house. The only thing that got me through this traumatic time was my familyvisiting and the making of new friends along the way, plus knowing I was there for the right reasons and the fact that I was trying to give my baby the best chance of survival.

After two weeks of having the balloon inserted, I had a scan and was informed that her lung volume had increased. I felt like we could do it and she could beat the CDH, I tried my hardest to be positive despite the many emotional break downs I had along the way.

At 30 weeks my waters broke and I was admitted into kings College Hospital for close observation for 4 weeks. My little baby hung on in there until the balloon was eventually removed at 34 weeks. The balloon was surgically removed and even though her lung volume had increased some more there was no certainty that she would survive. In my head I just knew that I had done all I could to help her survive and the next battle would commence again as soon as she was born.

Little did I know that her battle would come so soon, two days after the balloon was out and arriving back in Birmingham, my daughter Arayaa decided she was ready to enter the world. I was deverstated knowing that it would be hard enough to face CDH being full term let alone with prematurity added on top. This made the battle look even more bleak. Yet again I was prepared for the worst. I knew it was all out of my hands and in the lap of the gods, and the amazing medical team.

After 15 hours in labour Arayaa arrived to face the world. She was taken from me straight away and it was only after a couple of hours I could finally see her, I was so afraid dreading the worst, I knew I would not live without her. To my amazment I was told she was fighting. All I could see was this perfect little baby in an incubator with loads of wires and machines everywhere and a ventilator breathing for her keeping her alive. I prayed at her beside that she’d fight and get through it and to my astonishment she did just that. She was stable enough after 5 days to undergo surgery, she was transferred to Birmingham children’s hospital where they performed the surgery at seven days old. Her abdominal contents and liver were put back to where they should be and the extensive hole in her diaphragm was repaired allowing the lungs the space to develop. There were moments when I thought I was going to loose her due to difficulties in breathing and also catching a chest infection that collapsed part of her right lung. It was like a rollercoster progressing one minute and  deteriating the next. I can only explain it as the worst pain to ever after to go through in my life, watching her day by day fighting was so hard but she did me proud and overcome so many battles to finally being able to breath for herself.
Eventually we got Arayaa home on the 30th December 2012, this was the happiest day of my life. We was the lucky ones, but its sad to say that so many other parents  loose there babies to this condition, and have to leave hospital with only memories :(.. Please please please may I ask you to help support this charity, CDH UK. They supported me through  this difficult journey and they will continue to support me and others on there rollercoster journey too.
Arayaa is currently taking numerous medications and may continue taking them until she is older, only time will tell. These babies are also prone to ongoing medical problems, such as respiratory infections, asthma and feeding issues. By raising money this will also help research into the cause of CDH with a view to finding prevention and better treatment for this condition.

Thank you for taking the time to read our story.