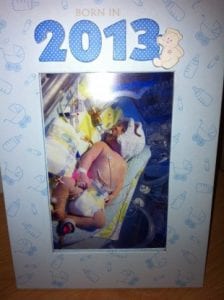 Our story with CDH started just like many other families.  Attending our 20 weeks scan very excited to know whether we were having a boy or a girl but little did we know that, that was the least of our worries. On my scan it appeared that Harry’s heart was displaced to the left the reason was unknown so the consultant asked me to come back in 3 weeks time to see if it looked any different. 3 weeks passed and with a holiday to Turkey inbetween I went back to see the consultant at our local hospital Harry’s heart was still in the same place which caused some concern, our consultant referred us to LWH ( Liverpool Women’s Hospital ). We attended our appointment, and we were diagnosed with right/central sided CDH our little boy was given a 50% chance of survival. We attended 4 extra scans at LWH to keep any eye and see how the CDH was progressing at our 34 week scan it was confirmed that Harry’s liver was also up in his chest as well as his bowel, (this hadn’t been picked up at any
previous scans). Christmas came and went as did New Year and my date for induction had landed 01/01/2013. Harry was born the following evening at 22.06 weighing 7.2 oz. Harry was ventilated immediately, and responded very well… He was even having a little cry and a fuss at the tubes to help him breath. His daddy and his granny were allowed to go and have a little sneaky peak at him at midnight, I had to wait till the next day to see him. I seem him the following morning and he was such a beautiful boy.  The next 48 hours passed by and he was doing very well, responding well and only on 50% oxygen so things were looking promising from our point of view. Unfortunately for us and like many other families this was the ‘honeymoon period’ Harry was on 100% oxygen and describe to be in a critically stable condition.  2 more days had passed and the consultant requested to have a sit down talk with us, we were told that they had tried everything possible for Harry no matter what t
hey did his oxygen requirement was not coming down, we were also told that out of all the babies on Special Care Harry was the poorliest baby on the ward (Heartbreaking to hear) Harry’s heart was being put under a significant amount of pressure, due to his extremely under developed lungs. I knew deep down what the outcome was to be. We had to make a decision that no parent should ever have to make – to stop all treatment. Harry passed away peacefully in my arms on the 09/01/2013 a week after he was born. He fought so hard, we were told by so many medical professionals that he gave a good fight but in the end it just wasn’t enough. ‘ too good for this earth’

Thoughts and prayers go out to all families facing there CDH journey although ours had the worst possible outcome babies with CDH do survive. I think about our beautiful little boy everyday and will never forget him x