The Journey of a Little Balloon

Many years ago a team based in Leuven, led by Professor Jan Deprest, set out on an incredible journey with the help of a little balloon. They set out to find out if survival rates could be improved in both severe and moderate cases of Congenital Diaphragmatic Hernia (CDH). The journey wasn’t easy and was long, but they finally reached their destination to evidence, assisted along the way by a dedicated international team and with a little help from CDH UK.

Trigger warning: Some parents may find the following information difficult to read or in some cases upsetting.

How does a little balloon help?

The idea was to place a tiny balloon (much like the size of a grain of rice), into the windpipe of an unborn baby in the womb. This would hopefully block the windpipe and cause pressure to build in the underdeveloped lungs.  The hope was that this would make the tiny lungs grow in size. They called this ‘procedure’ Fetal Endoscopic Trachael Occlusion or FETO for short.

How do they do FETO?

They make a 3mm cut in the pregnant Mother’s belly. They then very carefully guide the tiny balloon through the small opening and into the right place using a special instrument called an Endoscope. The Endoscope is like a long tube with a tiny camera and an opening and closing tool on the end. It is controlled by a Surgeon who sees the camera images on a screen. The camera allows the Surgeon to see where they are going in the womb and to find the unborn baby’s mouth. The Surgeon carefully guides the Endoscope through the baby’s mouth and down it’s windpipe. The tool on the end of the Endoscope holds the balloon and allows the Surgeon to release it into the position needed and then inflate it to plug the windpipe. 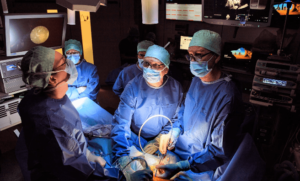 The Surgeon applies a numbing cream to the skin on the Mothers belly where he will make the small cut. As he guides the Endoscope through the skin into the womb the Mother may feel some discomfort. Most Mother’s describe this as a sensation rather than pain and that lying still for the length of time of the procedure is actually the most uncomfortable part. The unborn baby is also given pain relief during the procedure too.

How does it feel after the balloon is placed?

How is the balloon removed?

The balloon is removed using the same method as putting in the balloon, but the balloon is deflated allowing the unborn baby’s windpipe to be clear once again.

Can anyone do this?

FETO should be carried out by a Surgeon trained to do the procedure, along with a team who can provide the full care package including information and counselling.

Is FETO safe and effective?

The team conducted lots of research over many years. One type of research they did was called a Randomised Controlled Trial (RCT). This type of trial is the best way to compare different things against each other like treatments or medicines and to test they are safe and effective. It is seen as the best way to provide evidence. It is a very thorough type of research and includes lots of people who specialise in things like statistics to check the numbers to make sure that the researchers can be confident about the figures and results and Ethicists who take care of making sure the trial follows the principles of what is good for individuals and society as a whole. They also should include patient organisations like CDH UK, who are experts too and can represent the voice of the patient and help with public information and data safety. The team gave their trial a name called Tracheal Occlusion To Accelerate Lung Growth or TOTAL for short. They ran a clinical trial for severe cases of Left sided CDH and another for moderate cases of Left sided CDH. The results were published on the 8th June 2021 by the New England Journal of Medicine (NEJM) and the full publications can be found in the links below

Once the TOTAL trial reached it’s end it was closed and the trial team looked at the final results. They then had the trial results checked by Scientists and Medical experts who were not involved in the trial and the trial papers were accepted and published in the New England Journal Of Medicine.

The results show that in Severe cases of Left sided Congenital Diaphragmatic Hernia FETO increases the chances of survival significantly. In fact, the survival rate more than doubled.

The results show that in moderate cases of Left sided Congenital Diaphragmatic Hernia even though an increase in survival rate was seen, the increase was only small.

What are the disadvantages?

The procedure carries the risk of prematurity of the baby. This is because the membranes surrounding the baby can rupture because of the small cut made in the belly for the endoscope to reach the baby in the womb. This  can lead to premature labour and the birth of the baby before 37 weeks of pregnancy. This could lessen the effect of the FETO and so reduce the benefit of the effect.

What does this mean for future parents?

First of all it provides evidence which helps in decision making.

The trial results show that Fetal Surgery for severe Left-Sided Congenital Diaphragmatic Hernia improves survival rates. Therefore the research team recommends that this procedure is added to the treatment options offered to parents who have been given a severe diagnosis of isolated Left-sided CDH in their unborn baby.

The trial also found that the FETO procedure should be carried out in a medical setting suitable to carry out the procedure, with Surgeon’s trained in the procedure and able to care for the Mother and her unborn baby in the best possible way in the event of any problems.

How did CDH UK support the TOTAL Trial?

We initially helped with the TOTAL trial website. Later we were invited on to the Data Monitoring and Safety Committee (DMSC) to represent the patient view. We were also invited to witness the procedure being carried out at The Leuven University Hospital in Belgium to better learn how the procedure was carried out. At the end of the trial we worked alongside the local patient group in Belgium (Platform CHD) on developing patient correspondence and information regarding the trial results.

CDH UK’s response to the results

For many years the topic of FETO has been inflated and deflated much like the balloon itself. We have sat in many audiences at conferences and events around the world listening to the arguments for and against FETO.

We have also supported women who have received the FETO procedure (not always in the UK), which has often been difficult to do because of the lack of evidence. Figuring out how to best support these women in terms of signposting for physical and mental wellbeing and for further help and medical advice has also proved challenging. It has also been difficult to support women who knew that FETO existed, knew it was experimental, but wanted our help and advice on how to approach the subject with their medical caregivers to access the procedure. This has often led to frustrations for all involved.

As a result CDH UK was determined to support the TOTAL trial to it’s conclusion and see the evidence for ourselves, to help improve our knowledge base and ultimately our patient support.

We are very happy that the results are now published and that the balloon reached it’s destination!

However, it may not be the balloon’s final destination, as no doubt there will be studies and trials to further improve the procedure and widen it’s accessibility and application.

Congratulations to all involved in the trial and to our Patron Professor Jan Deprest. We hope one day you reach the moon balloon!

PLEASE NOTE: FETO can only be carried out in an unborn baby and does not help with babies diagnosed with CDH after birth. FETO needs to be carried out by trained medical professionals and within the timeframes and criteria as recommended by the trial and it’s investigators. The procedure is currently not a standard treatment offered to parents of babies diagnosed with CDH in the UK and discussions about the potential of FETO should be discussed with your Consultant in the first instance.

The final choice of treatment should in our view always remain with the Parent/s.